653 ½ Washington Street, Cape May, NJ| 1730colonialhouse@gmail.com | Find us on Facebook

The Society will participate in the Neighborhood Preservation Program (NPP) in Cape May. The City has been awarded a Neighborhood Preservation Grant from the New Jersey Department of Community Affairs for the Franklin/Lafayette Street area. A team of stakeholders involved in the area, including representation from the Greater Cape May Historical Society have been meeting to help guide the Plan for this important area. The Neighborhood Plan should be completed soon and implementation is expected to start in early 2020.

A Civil War Captain and His Lady by Gene Barr | Love, Courtship, and Combat from Fort Donelson through the Vicksburg Campaign

A Civil War Captain and His Lady is a true “Cold Mountain” love story from the Northern perspective.

"More than 150 years ago, 27-year-old Irish immigrant Josiah Moore met 19 year-old Jennie Lindsay, a member of one of Peoria, Illinois’s most prominent families. The Civil War had just begun, Josiah was the captain of the 17th Illinois Infantry, and his war would be a long and bloody one. Their courtship and romance, which came to light in a rare and unpublished series of letters, forms the basis of Gene Barr’s A Civil War Captain and His Lady: Love, Courtship, and Combat from Fort Donelson through the Vicksburg Campaign.

"The story of Josiah, Jennie, the men of the 17th and their families tracks the toll on our nation during the war and allows us to explore the often difficult recovery after the last gun sounded in 1865. Josiah’s and Jennie’s letters shed significant light on the important role played by a soldier’s sweetheart on the home front, and a warrior’s observations from the war front. Josiah’s letters offer a deeply personal glimpse into army life, how he dealt with the loss of many close to him, and the effects of war on a man’s physical, spiritual, and moral well-being. Jennie’s letters show a young woman mature beyond her age dealing with the difficulties on the home front while her brother and her new love struggle through the travails of war. Her encouragement to keep his faith in God strong and remain morally upright gave Josiah the strength to lead his men through the horrors of the Civil War. Politics also thread their way through the letters and include the evolution of Jennie’s father’s view of the conflict. A leader in the Peoria community and former member of the Illinois state house, he engages in his own political wars when he shifts his affiliation from the Whig Party to the new Republican Party, and is finally elected to the Illinois Senate as a Peace Democrat and becomes one of the state’s more notorious Copperheads.

"In addition to this deeply moving and often riveting correspondence, Barr includes additional previously unpublished material on the 17th Illinois and the war’s Western Theater, including Fort Donelson, Shiloh, Vicksburg, and the lesser known Meridian Campaign—actions that have historically received much less attention than similar battles in the Eastern Theater. The result is a rich, complete, and satisfying story of love, danger, politics, and warfare, and it is one you won’t soon forget."

About the Author: Gene Barr is the president and CEO of the Pennsylvania Chamber of Business and Industry, the largest broad-based business advocacy group in Pennsylvania. He has spent more than forty years in the political and government affairs world, including more than twelve years with a Fortune 100 energy company. Barr is a board member and former chair of the National Civil War Museum in Harrisburg, Pennsylvania, and spent many years engaged in Civil War living history events. He has a bachelor’s degree in political science from St. Joseph’s University in Philadelphia and lives in Mechanicsburg with his wife Mary. July 2016 ISBN: 978-1-61121-290-7 eBook: 978-1-61121-291-4

From the Society archives is a love letter written by John Reeves who lived at the corner of Stevens Street and the Turnpike (now Sunset Boulevard). Mr. Reeves died in 1925. His funeral was held in the Old Brick Church and buried in the Cold Spring Presbyterian Church.

Jim Campbell was Historian for the Society for many years. He documented the graveyards and burial grounds in Cape May as his life’s work, including a detailed collection of the Old Brick graves in Lower Township.

Soldier and Sailors Monument: The “All Wars” Rededication Ceremony

At the All Wars Monument
Columbia and Gurney Street, Cape May City
Starting Promptly: 11:00 AM with the Bells of Peace 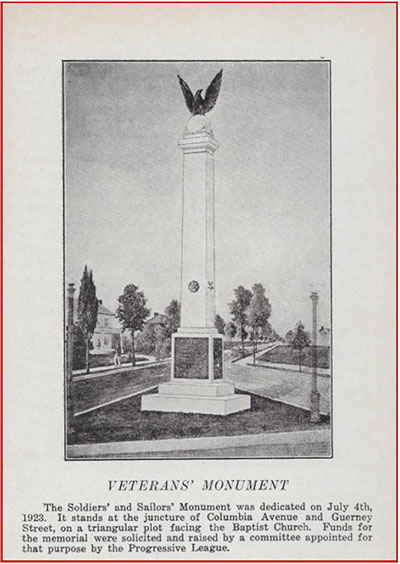 On September 27th, 2017, the United States World War One Centennial Commission and the Pritzker Military Museum & Library announced the First 50 official "WWI Centennial Memorials" through 100 Cites/100 Memorials program. The Greater Cape May Historical Society in partnership with the City of Cape May was selected as one of those first 50 grant awardees. The Society selected the Soldier and Sailors Monument, the “All Wars” for their grant submission to the Commission.

Since the April 6th centennial of the United States declaration of war and the subsequent national awakening about WWI, the interest and focus on local WWI memorials around the country has had a nation-wide resurgence. During the World War One Centennial Commission meeting in Washington DC on September 13, 2017, the Commission resolved to designate the awarded memorials as "WWI Centennial Memorials". Being the congressionally created U.S. government agency for the national commemoration of World War One, such a designation is an official national designation.

All awardees will be presented with an official certificate and a bronze medallion of the designation available to the awarded memorials suitable to be affixed to them. The rededication ceremony will officially close , the Society and the City’s commemoration for the 100th anniversary of the “Great War” in honor of those who in the name of liberty either made the ultimate sacrifice or who came back from Europe victorious. Their victory changed the world and helped forge the United States into the arsenal of democracy. 100 Cities / 100 Memorials recognizes and helps restore World War I memorials nationwide in order to create an ongoing conversation about the Great War, lest we forget.

“To put it in an American context: imagine an officer in the United States Army — in his 50s, say — on the Argonne front in 1918. As a young soldier he could conceivably have fought, 30 years earlier, in the last of the wars against the Plains Indians in the late 1880s. Yet now he stands surveying a different world. The tactics were 19th century — advance on the enemy. But the enemy had weapons of mass destruction — the battlefield was dominated by tanks, machine guns, howitzers, aircraft and poisonous gas. Some 117,000 American servicemen died in the 19 months of United States participation in World War I — more than twice as many as in Vietnam, nearly 20 times as many as in Iraq and Afghanistan.” 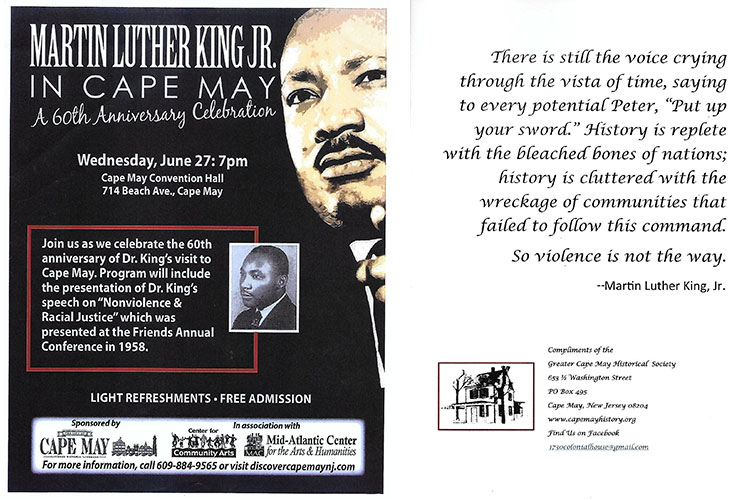 This year on Wednesday, June 27 at Cape May Convention Hall, the Greater Cape May Historical Society partnered with Cape May City, and community non-profits to celebrate the 60th Anniversary of Dr. Martin Luther King, Jr.’s participation in the Friends General Conference. The conference was held the week of June 23 to 30, 1958 in Cape May. At the conference, Martin Luther King, Jr. spoke on “Nonviolence and Racial Justice”. The conference held that year covered topics ranging from theology, leadership, artistic, economic, education, the UN, peace, science, creative maturing, and race.

The Society was granted permission to reproduce two hundred copies of the original journal that includes the full text of Dr. King speech.
From the Editorial Comments for the 1958 conference:

…."Faith as well as fear might be likened to [such] rivers. Nobody came to Cape May to check whether faith minus fear would really equal peace of mind. Both faith and fear are mighty streams coursing together toward the manifestation of strength or disaster. Cape May rather turned our eyes to many new openings in the secret life of the spirit that will remain neither private nor subject to human proportions. The mysterious forces of faith and fear can only in part be managed by human loyalties. Their ultimate course is one with the eternal destiny and the divine grace which so richly blessed this year's Friends General Conference."
William J. Hubben, Editor and Manager. Friends Journal. July 26, 1958

In September 2017, The Greater Cape May Historical Society, in partnership with Cape May City, was selected as one of the “First 50” winners by the U.S. World War One Centennial Commission and The Pritzker Military Museum and Library. To learn more about the WWI 100 Cities-100 Memorial project and the complete list of only 100 memorials selected as finalists across the country:

In the aftermath of World War I, Americans erected thousands of memorials throughout the country to commemorate US participation. Many were the work of the leading sculptors, artists, and architects of the day; others, such as simple honor rolls, were more modest but no less heartfelt. Sadly, as we approach the war's centennial, these memorials and their original purpose - to honor in perpetuity the more than four million Americans who served in the war and the more than 116,000 who died - have largely been forgotten. Many of the memorials have fallen into disrepair through neglect, theft, or vandalism.

The World War I Memorial Inventory Project is a volunteer-based effort to assemble a comprehensive, online record of World War I memorials and monuments in the United States. Its mission is to promote the documentation, preservation, appreciation, and interpretation of these memorials, and in so doing, to raise the profile of World War I in American public consciousness.

The monument was commissioned by The Grand Army of the Republic and Kindred Spirits by Post 40 John Mecray in Cape May City. Johnn Mecray is buried in Cold Spring Cemetery.

The "Grand Army of the Republic" (GAR) was a fraternal organization composed of veterans of the Union Army (United States Army), Union Navy (U.S. Navy), Marines and the U.S. Revenue Cutter Service who served in the American Civil War for the Northern/Federal forces. Founded in 1866 in Decatur, Illinois, and growing to include hundreds of posts (local community units) across the nation, (predominately in the North, but also a few in the South and West), it was dissolved in 1956 when its last member, Albert Woolson (1850–1956) of Duluth, Minnesota, died. Linking men through their experience of the war, the G.A.R. became among the first organized advocacy groups in American politics, supporting voting rights for black veterans, promoting patriotic education, helping to make Memorial Day a national holiday, lobbying the United States Congress to establish regular veterans' pensions, and supporting Republican political candidates. Its peak membership, at more than 490,000, was in 1890, a high point of various Civil War commemorative and monument dedication ceremonies. It was succeeded by the Sons of Union Veterans of the Civil War (SUVCW), composed of male descendants of Union Army and Union Navy veterans. (source: Wikipedia)